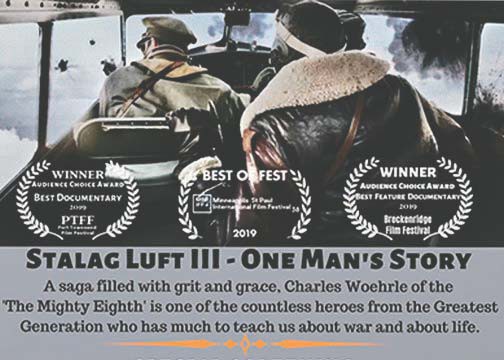 ST. PAUL — “Stalag Luft III – One Man’s Story” is a remarkable story of grit and grace that spans almost 100 years. The film’s screening will be held on Saturday, Feb. 29, at 2 p.m. at the Landmark Center F.K. Weyerhaeuser Auditorium, located at 75 Fifth St. W. in St. Paul.

The film chronicles the journey of former St. Paul, MN, resident Charles Woehrle as he relives his harrowing story flying in the Mighty Eighth, and as a prisoner of war in Stalag Luft III – the Nazi prison camp made famous by the iconic 1963 Hollywood film “The Great Escape.”

“Stalag Luft III – One Man’s Story” has received two Audience Choice Awards for “Best Feature Documentary” from the 20th Port Townsend Film Festival and the 39th Breckenridge Film Festival. Many of the feature docs at both festivals have screened at Sundance, Toronto, Tribeca and SXSW. Stalag also received “Best of Fest” at the 42nd Minneapolis St. Paul International Film Festival.

“Stalag Luft III – One Man’s Story” is told by WWII U.S. Eighth Air Force Bombardier Lt. Charles Woehrle, one of 10,000 prisoners of war in Stalag Luft III. At age 93, this remarkable man and gifted storyteller take us from Pine City, MN, to war-torn Europe as he relives his experiences with vivid detail supported by reoccurring reenactment imagery of his B-17 getting shot down(VFX), capture by the Nazis, the 70 mile forced march in below zero weather, and the home front.

He survived two long years of uncertainty and tremendous hardship as a prisoner of war. A saga filled with grit and grace, Charles Woehrle of the “The Mighty Eighth” is one of the countless heroes from the greatest generation who has much to teach us about war and about life.

“I witnessed the impact my Uncle Charles had on people wherever he went and knew his stories could touch many more lives if I could document them in a film,” said filmmaker Louise Woehrle. “Through private screenings and festivals I have witnessed a healing impact of the film on family members whose loved ones couldn’t talk about the war. “

Although Charles Woehrle is the subject of the film, director Louise Woehrle insists it is not a tribute film about her uncle but rather a human story that shows us how one man made choices to overcome his challenges and great adversity through creative thinking, kindness and compassion.

Louise Woehrle is a multi-award-winning filmmaker including a regional Emmy Award whose various films are culturally diverse with a global reach. A passionate storyteller, Ms. Woehrle’s mission is to shine a light on stories that need to be told with the hope they will inspire and serve as catalysts for change.