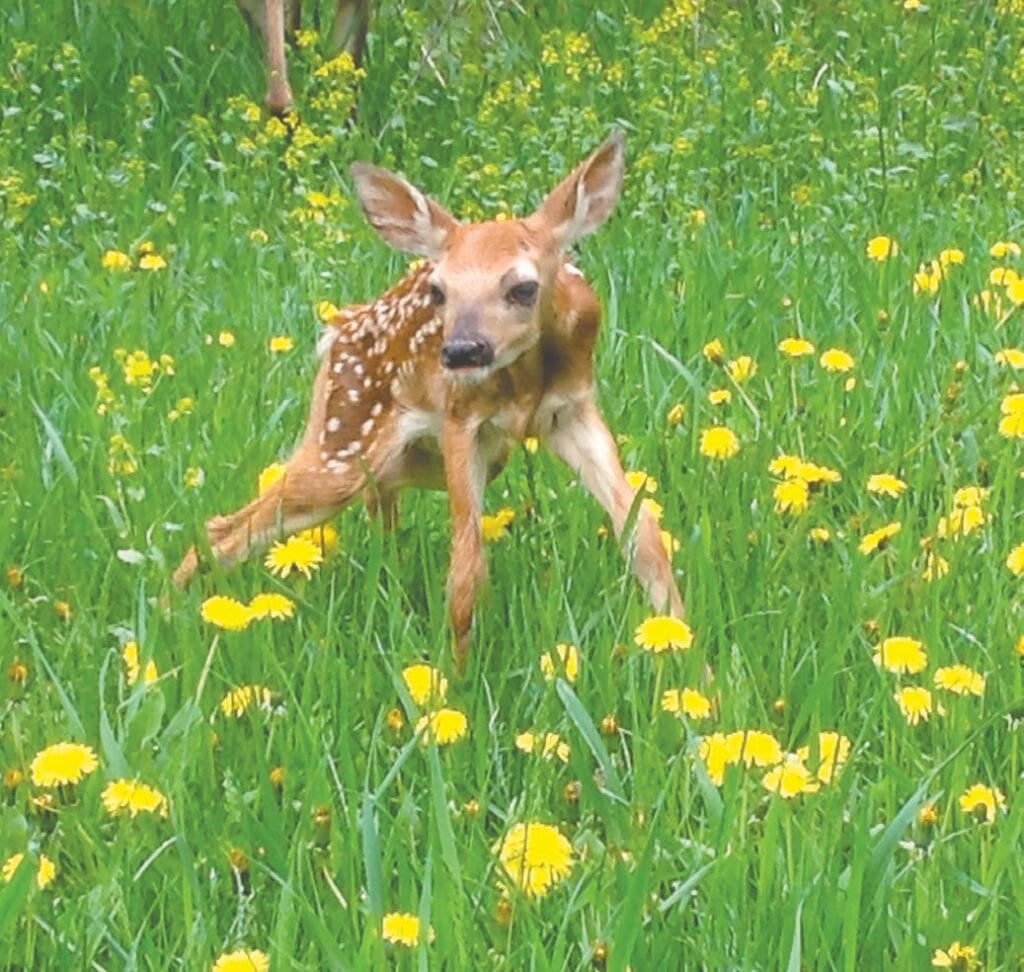 Debbie attentively watched this fawn and its mother at her rural Hibbing home last May. Submitted photo.

EDITOR’S NOTE: Debbie Lamphere’s saga of a doe and its fawn continues this week as Debbie describes how the two animals try to evade a predator. —Tucker Nelson, HTF Editor

The fawn saw me and, true to form, followed me. I backed up a few yards to enter the edge of our lawn. It must have been an unusual sight to see. As I backed up, the fawn followed me and the mother followed the fawn! We traveled that way (moving toward the house) for approximately 60 feet. At that point, I decided to go inside for some (what else?) bird seed to feed mother deer. I was not gone long, but when I returned mother deer was in our front yard and the fawn had disappeared.

Mother deer was not interested in the bird seed. She watched me walk the road north of the house to enter our second driveway. I was curious as to what had happened to the fawn. When mother deer left for a few minutes (probably to visit the water hole across the road), I was able to discover where the fawn was and went back inside the house.

It was not my judgment call, but I was worried with the hiding place mother deer had selected for her baby, but in a sense it could have been perfect. For me, it was too close to the road, which left me feeling uneasy. There was lots of traffic that night, which I found worrisome. I was not sure the fawn would stay in place and not wander out onto the road.

At that point, I went inside and pondered the situation. I contemplated the possibility of sleeping outside that night to keep an eye on things. The thought of waking up to the real possibility of a hot panting bear’s breath in my face was a deterrent to that thought. I did not take that possibility as a serious threat at that time. I did, however, decide that my involvement would be more likely a possible hindrance, rather than an asset, to the fawn’s safety.

Next, I emailed my youngest brother in Eagan for moral support. I explained the situation to him. Not really expecting any support from him, I signed off, saying that he did not have to bother answering. He is single (ladies), married to his high-end job, knowledgeable, and a great conversationalist. He is also hysterically funny, but he does not have any experience with mother’s milk or any interest to my knowledge. His interest would have been amused and condescending at best. I do not see him often, but if he has an inkling of what I have had to say, I might see him when he drives up to take care of me the following weekend. Now that is a real possibility!

That night I finally went to bed with, at least, the first puzzle solved in my mind. The mystery of the crying fawn was unsolved, however. A light went on before I finally would drift off to sleep… That was it! Mother deer was at it again, driving me crazy only currently with her offspring! While the sweet spring concert continued outside my window, I hummed one of my favorite songs “The Sounds of Silence” by Simon and Garfunkel in an attempt to soothe myself. I did not sleep well.

Sunday, May 31, was a glorious day! After spending time painting rocks, I went for a long run. The run is routine unless I have a social conflict, the weather is stormy, or I have been pushing too hard and decide it best to take a physical break. I like to do one long run a week because I am a little lazy and I feel that might make the rest of the shorter runs that week easier. I feel then I will be in better shape for them.

The run is five miles long and is not hard. However, it can be hard if it is hot, humid, or I run into a strong headwind. For me, it is not as easy or near as fast as it used to be. But I give myself credit for doing it.

After returning, I showered and, around 10 a.m., I decided to show and tell my husband about what had happened the evening before with the fawn and mother deer. I lead him to the field north of our home and walked through the motions to show him exactly what happened. I lead him to the spot where the fawn had been hidden the evening before. It was hidden under the Norway pines near the road. My arms flailed slightly (not something I normally do) as I excitedly explained and told him the story.

I did not see the fawn under the pines. My husband took a half step forward and asked if this was where I had last seen the fawn and I said, “Yes.” He softly said, “It is right there.” My husband does sometimes have more common sense than I do, and this was one of those times. My excuse in not immediately seeing the fawn is, I was trying not to disturb it if it was there. And I did not expect it to still be there!

My husband usually has “man eyes,” but I must admit that he was the winner that day in that he saw the fawn. It was probably because I was standing right there beside him.

Left to our own devicesNew opportunities for youth Lyric Center offers many creative outletsTiny, sweet, and delicate (part two) The story of a doe and fawn continues