THIS WEEK IN RANGE HISTORY

Virginia firemen, vehicles, and horses circa 1920.

EDITOR’S NOTE: An article on the preceding page contains information about Friends of Virginia Public Safety and a fundraiser they are holding to support the Virginia police and fire departments. The organization also hopes for a new public safety building, so this week I’m including some articles about Virginia’s transition from a volunteer to a paid fire department and the completion of the current fire hall.

The Virginia Fire Hall opened in 1907, but its original façade is no longer visible, as it was replaced during a remodeling and expansion in 1914. The building dates to an era when a cow roaming Virginia’s streets wouldn’t have been a shocking sight. The fire department had previously been located at Virginia’s two earlier city hall buildings; one at the site of the present fire hall, and one at the site of City Hall. —Tucker Nelson, HTF Staff Writer 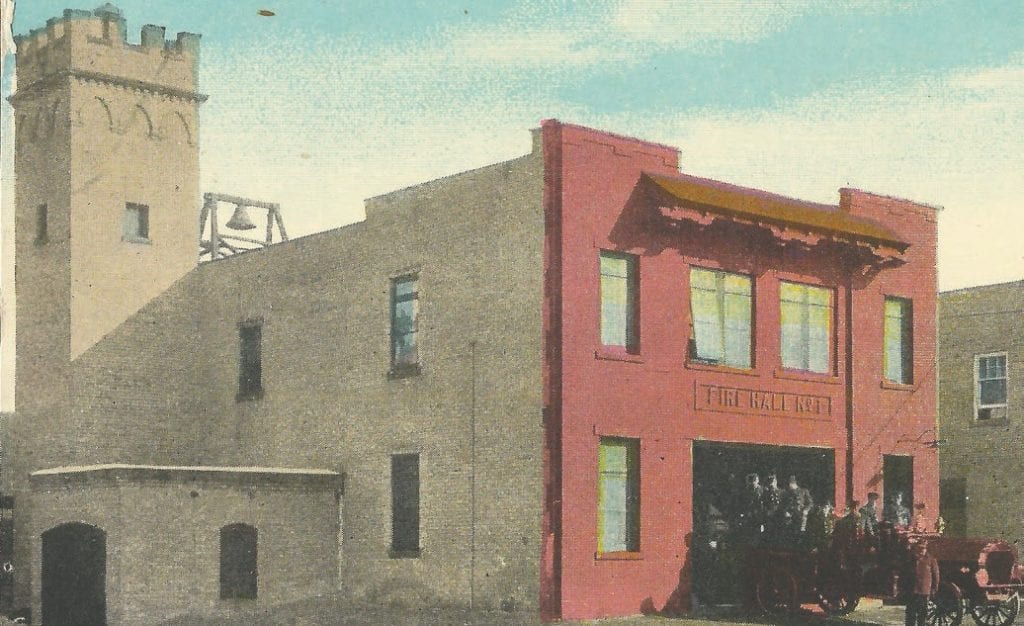 This postcard shows the Virginia Fire Hall between 1911 and 1914. Photos courtesy of the Virginia Area Historical Society.

After a consideration of the bids submitted for the erection of the proposed new fire hall, on the site of the old city hall building at the corner of Cleveland [3rd] avenue and Walnut street [1st Street N.], Contractor James Sampson was awarded the contract for the building by the city council at the adjourned meeting Wednesday evening.

The new building has become a necessity, as has also the enlargement and improvement of the fire equipment, and it is hoped that whenever complete the council will not feel that the city is too poor to put a few thousand dollars more in to the purchase of a team and necessary apparatus. Next to a change in the sanitary conditions and prevailing method of permitting cows and other animals to roam the streets and test the solidity of the walks of the city, Virginia demands better fire protection than has been its lot in the past, the department being held down on expenditures at every stage despite the fact that two hard learned lessons [two devastating fires that nearly destroyed the entire city in 1893 and 1900] should have taught our people the value of ample provisions of this nature.

The construction of the building will be under the supervision of H. E. Foosness, who was appointed at 2 per cent of the contract price, and work on the same will commence as quickly as possible. —Virginia Enterprise, June 21, 1907

Contractor James Sampson has this week commenced work on the foundation for the new fire hall and the dirt is flying in a manner that portends business. The new building will be not only a needed improvement but a handsome addition to north Cleveland avenue. —Virginia Enterprise, July 5, 1907

Steve Goddard was appointed yesterday as fireman at a salary of $60 per month, the first paid fireman to be engaged by the city.

It is probable that Mayor Eaton will veto the resolution passed by the council Tuesday evening to the effect that a chief be appointed at $75 per month and three fireman each at $60 per month. He believes that the chief should be some business man who could devote part of his time to the duties at a smaller salary, thus saving the city a considerable sum. He thinks that three men are enough to pay salaries. —Virginian, Sept. 6, 1907

Upon recommendation of H. E. Foosness, superintendent of construction of Fire Hall No. 1 and after an examination of the handsome new building and the work done thereon by Contractor Sampson by the committee on city property, the council at its meeting Tuesday evening formally accepted the new building.

The new hall, which has heretofore received extended mention in the columns of the Enterprise, is the finest fire hall on the ranges. It will be complete in detail and ready for occupancy in another week.

An estimate of $200 was upon recommendation of Superintendent Foosness allowed Contractor Thayer on the heating plant being installed in the new building.

City Engineer Johnson reported his final estimate on the sewer contract of C. C. Butler in District No. 3G, recommending the withholding of the sum of $150 until the ground could be thoroughly tamped in the spring. This report was accepted and a resolution passed authorizing the payment of the balance on the contract, $876.66.

The street commissioner was instructed to extend the twelve foot walk on Cleveland [3rd] avenue north from the new fire hall to connect with the walk on Walnut street [1st Street N.] —Virginia Enterprise, Dec. 6, 1907

The new fire alarm system put in by the Gamewell Fire Alarm Telegraph Company was thoroughly tested on Tuesday and found to work to the entire satisfaction of the committee and at the meeting of the council the following evening the system, said by the gentleman installing same to equal or surpass any fire alarm system in the state of Minnesota, was formally accepted and an order in the sum of $1,850 as the first annual payment thereon was ordered drawn.

Upon recommendation of Superintendent Foosness orders were drawn in favor of James Sampson in the sum of $3,130, E. W. Lachner in the sum of $29.62 and the Virginia Hardware Co. in the sum of $284 as balances due on contracts for building, wiring and plumbing in the new fire hall building.

Fire Chief Stevens recommended the purchase of a sleigh for the fire department, and after considerable discussion as to the proper sleigh to be built or purchased the providing of the equipment was delegated to the committee on Fire and Fire Department. —Virginia Enterprise, Dec. 13, 1907

The fire and police commission have received a letter from the Haynes Motor company stating that the chief’s fire car has been shipped and that it will be in Virginia on Monday. It is a four-passenger roadster, equipped with all modern conveniences and two Babcock fire extinguishers. The machine is of a bright red hue and cost $1,850. Of late a rented car has been used by the chief for fire purposes. The present fire hall will be enlarged on the north side 27 by 50 feet, which is an absolute necessity if the chief’s car is to be kept in the fire hall.

The building and property committee up to a late hour last evening had not met to decide on making improvements on the present fire hall, but will in all probability meet this evening or tomorrow to decide upon it. — Daily Virginian, July 10, 1914