Focus on: Plants on the move 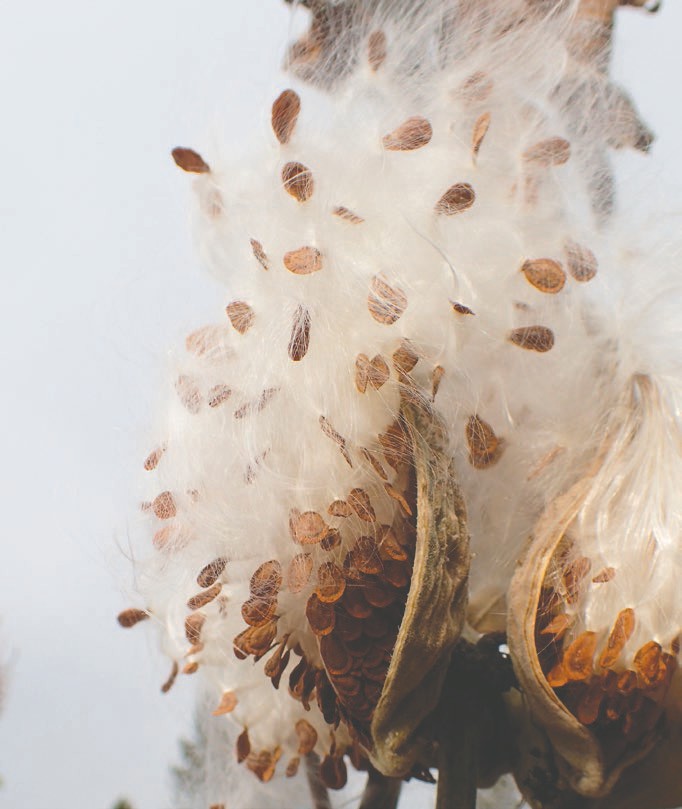 A common milkweed releases seeds to the wind. Submitted photo.

Fall and early winter are the times for many plants to be on the move. While they cannot pull-up roots, they do find ways to move, in a manner of speaking. Plants that travel, in one way or another, have great advantages. The early life of a plant as a seed is the time most plants move. The habitat of a plant may change for the worse, and plants that have mobile seeds are favored. Competition from other plants for space and light is a constant threat. Plants that have travelling seeds are far less likely to be exterminated by leaf eating bugs or other animals, soil degradation, climate change, or plant diseases. Plants that have mobile seeds can become widespread.

Several means of transport are available to plants as seeds. Many utilize air travel. Wind is used by many plants to disperse seeds. Many wind-dispersed seeds are connected to fluffy liteweight structures that act as sails. The seeds of milkweed are a familiar example during the fall. Others are fireweed, asters, cattails, and thistles. The transport by wind of these plants continues for a period of months. Commonly they are seen wafted by the wind, but later during the winter they may drift along the surface of the snow.

The downy sails of thistles are so distinct that they have a name: thistledown. During the early autumn these seeds sometimes are seen rising from fields singly or in clusters, and drifting up and away. The most common of the thistledown producers is Canada thistle; it is proof of the effectiveness of wind dispersion. It is a nonnative plant that has become one of our most common weeds, to the chagrin of many, because it disperses so well by air. On the plus side, one of our favorite birds, goldfinches, feed heavily on thistle seeds during fall. They even nest late in the season to take advantage of the crop of thistle seeds and to use the thistledown to line their nests.

A totally different mode of transit is used by another group of plants during the fall. Most people find these to be pesty and obnoxious. These are seeds that stick to clothing or hair. Examples of these include beggar ticks, hold tights, and burdock.

These have their means of travel perfected, with little barbed bristles that pull loose from the parent plant. One of the most distinctive of these plants is burdock, which has spherical seed head. It sometimes goes by the common name of porcupine eggs. It is frustrating to know, if you stop and pick these off your clothing and throw them aside, you are doing exactly what these seeds are designed to do.

The seeds of many berries or other fruits travel with a little help from their friends. The fruit is a major food for many birds. Usually the seeds are eaten along with the fruit, pass through the bird, and are deposited elsewhere. A few mammals, such as bears and raccoons, also provide this service to the plants.

Conditions in the Northwoods constantly change. Plants must cope with the changes, and move on.