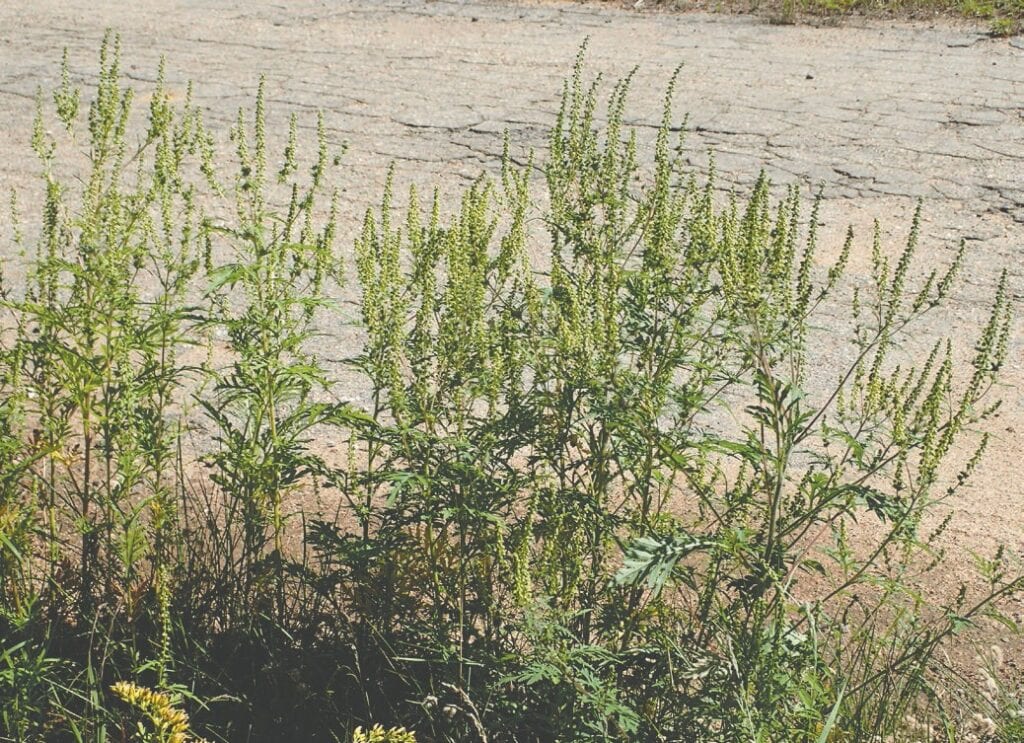 Ragweed is a leading cause of hay fever but often escapes attention due to its inconspicuous appearance. Submitted photo

Sniffle, sniffle, sneeze, sneeze, and red eyes too! No, this is not another article about our current pandemic, it’s an article about hay fever and its most common cause: ragweed. Hay fever is a common condition. Many of us are acutely aware of it. It is a cruel twist of fate that this Nature Nerd, who loves being outdoors, suffers from. (Sniffle, sniffle.)

Allergy conditions are common. People are allergic to many different things. Pollen from plants is high on the list. Ragweed is the king of the pollen producers and, to add insult to injury, ragweed grows in our midst. We see it every day. It grows in every vacant lot; it grows in little unmowed patches along streets and alleys. It is a tough plant that grows everywhere other plants cannot. Along roads and highways ragweed is the first strip of vegetation at the edge of the pavement, road salt does not kill it. (Where’s my closest tissue box?)

Various plants get pollenated in different ways. Most plants are pollenated by insects, bees are the most famous pollinators. Other insects pollenate plants as well, like butterflies, wasps, flies, and even some beetles. There is a big advantage for the plants that get pollenated by insects. Relatively, little pollen is wasted, so insect pollenated plants produce a smaller amount of pollen. There is another way that ragweed and many other plants get pollenated—wind. Wind is very inefficient at pollination. Most of the pollen blows away to every possible place that the wind can blow stuff, including our noses and eyes. (Achooo!)

Often, goldenrod gets blamed for hay fever, but it is not the main cause. Allergies are so variable that it is difficult to make broad sweeping statements. Goldenrod gets blamed because it’s blooming at the very time hay fever from ragweed occurs, and it is a conspicuous plant, but appearances can be deceiving. Goldenrod is an insect pollenated plant. If you take a walk in a meadow with goldenrod you will see bumblebees, wasps, and flies on the flowers. Goldenrod produces relatively little pollen. Meanwhile, because it is inconspicuous, ragweed escapes attention. It is a drab, boring plant. It has flowers, of a sort, but lacks colorful petals. To the Nature Nerd it is frustrating to see this despicable plant everywhere, every day (enough to bring tears to my eyes).

The appearance of yellow plants in our meadows is changing, however. Goldenrod is being replaced by the invasive plant common tansy. It is tansy, and not goldenrod, that adds yellow to the colors of our fields and meadows. However, tansy is another insect pollenated plant that produces little pollen.

Before I need to run for my eye drops, I will add one more thing. In southern Minnesota’s agricultural area there is another pollen producing plant: giant ragweed. Giant ragweed can grow to be over eight feet tall. Sometimes it overtops corn in the fields! It could be worse.