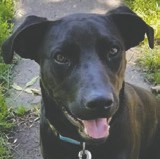 EDITOR’S NOTE: Case makes his long-awaited return with another volume of The Lost Puppy Case Files with his foil—yours truly. —Case’s editor

Very many bad things have to occur for me to have a bad day.

One, I have to miss a meal.

Two, uh, well, after further consideration, missing a meal does make for a bad day all by itself. So I guess it takes many bad things for me to have a bad day, unless one of those things is missing a meal. Believe you me, I don’t miss many, so I don’t have many bad days.

Excuse me if I lose my train of thought. I’m just a puppy, and I’m easily distracted. One sec. I’m being handed a note.

The “puppy” excuse is getting old, just like you. You will be three next week. You may act like a puppy, but you are a dog.

Unless my math is off, I will be 21, thank you very much. Does that mean I get to…? Hold on. Another note.

Moreover, you aren’t actually 21 years old. A year is the time it takes the Earth to circumnavigate the sun. It’s the same amount of time for dogs as it is for humans. You’ve made three revolutions of the sun. And the answer is no. You cannot do whatever shenanigans you have planned.

P.S. It’s grow-up time. You aren’t getting any younger.

Voilà! My puppy sense is tingling. Full disclosure: The Man is handing me these notes he says are from Editor dude, but are they really? What if Editor and the Man are one and the same person?! Wouldn’t that be wild? Editor sounds kind of know-it-all-y like the Man sometimes does. I don’t think it’s possible though. I’ve never seen them in the same place at the same time. Editor is this guy with glasses I’ve seen come around a few times. Sometimes he feeds me and lets me outside, so I consider him a swell fellow. The Man is just the Man, that guy in a baseball cap who adopted me and feeds me and sometimes brings me to Texas. The best thing about him is he married Annie, and she “spoils me rotten” or so the Man often claims. Can I help it that I’m cute? Annie gives me positive reinforcement about that all the time, while the Man—he calls me a knothead. Better than having an abnormally large head like him, but who am I to judge?

Oh my goodness! I just remembered. I had blocked it from my memory because it was so disturbing. I walked in on Annie kissing Editor one night! Granted, he was trying to get away, just like the Man always does when she swoops in unawares. I still haven’t figured out how to activate my “Stage 5 Clinger” alert the Man gave me for when she’s on the prowl for hugs and kisses. He’s very disappointed in my performance.

Timeout. Another blacked out memory. I forgot to mention the guy who wears a baseball cap AND glasses. Annie was kissing him, too! She wouldn’t let him escape. He was struggling for air. I wonder if he survived?

Egad! I just thought of a movie I once saw. There was a guy who worked for a newspaper. He was very mild-mannered. He wore glasses. I think he worked for the Fake News and wasn’t very good at his job. But he was really good as his other job where he traded his glasses for a cape. (I bet if I had a cape I would be pretty awesome too.) The Man also worked at a newspaper. He is very mild-mannered, except when he’s yelling at me when I’m tearing off to greet somebody. The similarities end there. I’m not sure where I was going with that one.

Frankly, I’ll be honest. Annie has kissed me before too. And she hugs me until I squirm free. She also gives me daily sponge baths. Who knows, maybe, she’s just a very affectionate person.

Really, I am a smart puppy, so I’ve figured it out. The Man is like Superman (except he’s not) and Editor is like Clark Kent. They’re the same guy! Zoinks! They’re probably also the third guy with the cap and glasses. Come to think of it, he’s kind of like Superman when he’s feeding me dinner or treats or taking me to the beach. Then I can see his cape behind him, fluttering in the breeze. I’ve known for some time now that indeed Editor is either A) the Man or B) his evil twin. I was leaning toward the latter. But Annie seems to love them—I mean, him—despite his many quirks.

You do remember, however, who buys your food, I’m sure. Be careful, pal.

Also, maybe if you paid more attention and weren’t bouncing off the walls all the time, you would have noticed that I’ve worn glasses since I got you.

Duh. I know you wear glasses, but what about the Man? Shucks. Humans and their many disguises, always hiding behind a mask. Now you all are covering up your many masks with more masks. How can a society survive everyone hiding behind all these masks?

Oh, I’m off on a rabbit trail again. I think I started this piece—which the Man asked me to write because he’s got writer’s block or is too busy or something—talking about a bad day or that it would take a lot of things going wrong to have a bad day. I felt bad for Annie Sunday when her Chiefs lost to the Raiders, and she lost her starting quarterback Dak Prescott to a bad broken leg. The Man’s Vikings also found a way to snatch defeat from the jaws of victory that night. But things like football are pretty minor in the grand scheme of things, and minor things shouldn’t make you have a bad day.

Maybe that’s what I was trying to say. I don’t have bad days because I don’t let the little things, that which is outside my control, affect me. I let them go. I’m thankful for what I have and happy to spend time with and listen to and obey my master— even if I’m not the best at listening and obeying all the time. Setbacks don’t stop me because I’m always moving ahead to the next challenge that presents itself—like catching these darn pigeons or figuring out who this guy in the house is with a patchy beard. I think it’s one of the Man’s disguises, but I’m not sure; maybe I’ll try to lick it off. Or maybe, I’ll just lay in the sun. No bad days.

Case lives with the Man and Annie (sometime HTF columnist Brian Miller and his wife) in Eveleth or Texas or wherever they are right now.