Something had a craving for Canelake’s fudge 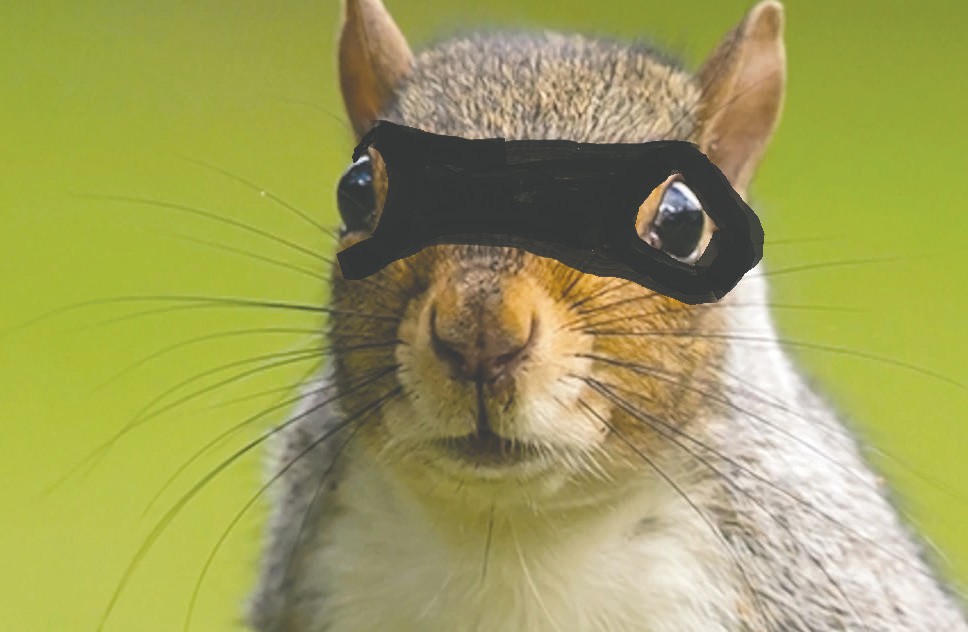 A squirrel is the suspected bandit that ripped through the package that sat on Mary Jo’s porch and stole the fudge with walnuts from its contents. Nuts! Submitted photos.

The text was from Mary Jo, the widow of my longtime friend Terry.

I “went to visit my mom around noon and returned back home right before 5 p.m. There was a package by the front door.”

There was a picture of the package and the contents, plus bits, fragments and pieces of the package I had sent by mail in hopes that it would arrive by Christmas Eve.

“Looks like something enjoyed a whole box of chocolate walnut fudge. I wonder who would like walnuts?”

My heart sank as I viewed the picture. This year I wanted to send her a gift that was more unique. I had sent her Canelake’s chocolates the year before, which were a terrific hit, but this year I was trying not to be redundant. As the days ticked off approaching Christmas, I grew even more perplexed. Finally, I decided to go for the sure standby.

I wanted to give her a number of samples of special candy bars that Canelake’s Candies is noted for, but my search started too late. The bins were pretty picked over each time I checked, so I settled on the boxed samplers. 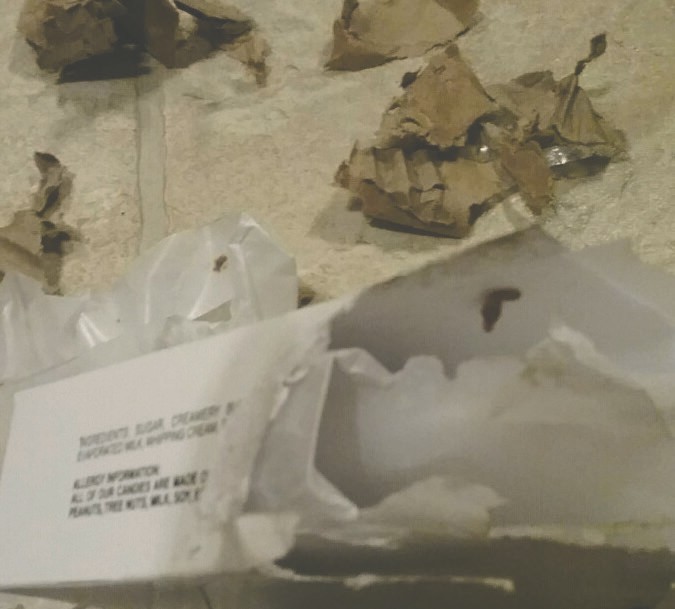 Pictured above are the fragments and pieces of a gift package Randy sent to a friend for Christmas. All that was taken from the destroyed package was the box of fudge with walnuts made by Canelake’s Candies.

“Lol! Never seen anything like this before. I was pretty shocked. Thanks so much. I love my sweets.”

“Holy [crap],” I replied. “Were you able to salvage anything?” I texted back in amazement.

“All of it except that one little box of fudge. I think it might have been a squirrel.”

The litter and damage had all the telltale signs of a mischievous squirrel. Squirrels have an amazing sense of smell. They can locate nuts and stash below a covering of snow and soil. One study found that they do not rely on their own memory in locating food, they rely entirely on their sense of smell. They find theirs and those of others squirrels who have buried stash.

So, that little bugger could smell those walnuts in the fudge all the way through the shipping tape, the cardboard box, the cellophane wrapper, the candy box, and the liner! They have teeth to match the job. The holes looked like they were made with an improvised can opener.

Mary Jo reported that all the contents were strewed about the yard near her stoop, and the box was left alone, empty at the door.

All of the pieces of fudge with walnuts was gone, without sign, either eaten or stashed away for the Christmas feast to follow. I know that chocolate is not good for dogs, so I queried online. It turns out that chocolate contains an alkaloid called Theobromine, which is reported to be harmful to most mammals. Many people might respond “no loss,” but I would not want to be the cause of an early demise of the little guy, even if his mug shot is posted on a tree nearby.

I was relieved when Mary Jo reported that the rest of the contents of the box were retrieved untouched. She had assembled the pieces on her tile floor to give me a composite view of the caper.

For next year, I’ll have to devise a squirrel-proof plan. Should I leave the fudge with walnuts out of the inventory? That seemed to be the focus of the heist; all of the other delicacies were bypassed. Or maybe wrap the package in hardware cloth and concertina wire? No, that might alarm the carriers. No need to set oneself up for a visit by men in black. I usually come up clean on background checks, and I’ve had a few, some ancillary to positions applied for, some incidental, like when I was caught with the trigger to a flintlock rifle in my pocket while passing through security at the Bangor, Maine, airport.

I’ll have to check with Canelake’s to see if they have any suggestions. The only sure way I know of is to use ammonia. Squirrels, and a lot of other critters, hate the smell of ammonia. Rather than douse the outside of the box with ammonia spray, which would not pass the hazardous chemicals test at the post office, I could always include a handkerchief sprayed with a dab of ammonia as a deterrent. I could forewarn Mary Jo to apply a clothespin to her nose, and open the box in a space with adequate ventilation.

Randy Lanquist lives in Virginia. He moved back to Virginia in 2020, after 50 years of pursuing his career in information technology in the Twin Cities. His siblings have all returned back to the Range; Randy was the last to move back.

Hamming up HamletReflecting on ChristmasPasties, pot pies, pancakes, and more