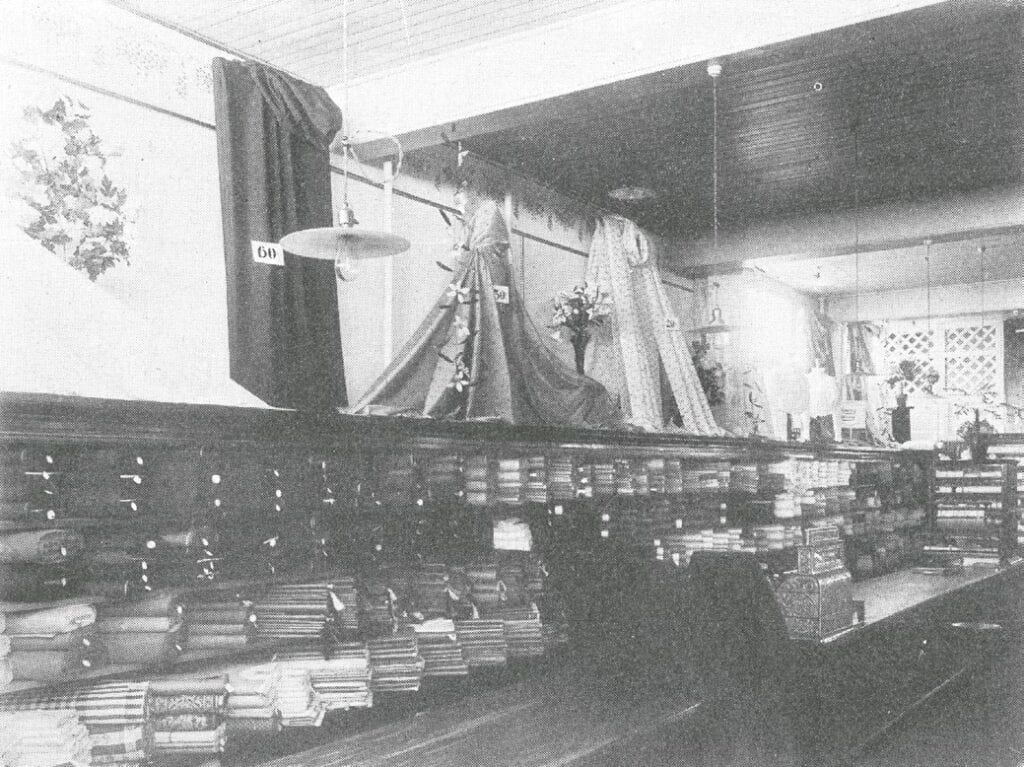 An aisle in Itasca Mercantile Company’s store, circa 1909.

For a third of a century, Grand Rapids has been the chief commercial center of a vast range of territory including Itasca County and portions of several adjacent counties. This circumstance naturally led to the establishment of a number of mercantile enterprises at this place and there are few, if any, other towns in northern Minnesota which have developed so many successful marts as have been built up in Grand Rapids.

Foremost among these establishments is the Itasca Mercantile Company, which was incorporated in 1892 with a capitalization of $100,000 and has prospered far beyond the anticipations of its original promoters. For some years after the organization of the company, the furnishing of lumbermen’s supplies was the chief object of this undertaking but, with the gradual decadence of the logging industry in this territory and the simultaneous development of agriculture and other industrial undertakings, the establishment has taken on more of the characteristics of the modern department store. 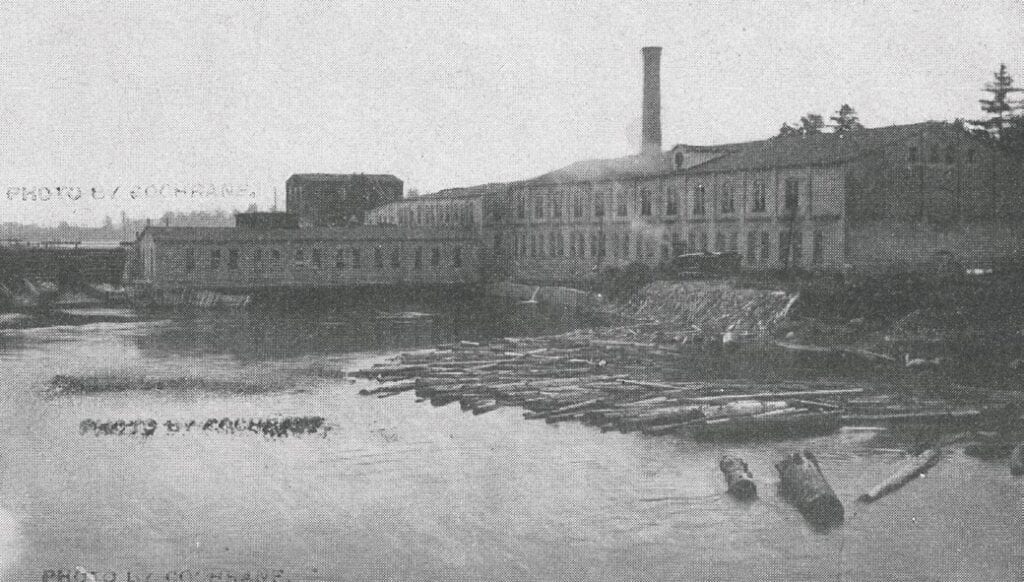 The Itasca Paper Company’s plant on the Mississippi River in Grand Rapids. The company became known as the Blandin Paper Company in 1933 and today is UPM Blandin.

A branch store was opened at Hibbing in 1895 which soon became the leading mercantile emporium of that city and has always carried on a trade the volume of which compares favorably with that of the parent establishment. The business at Grand Rapids has steadily expanded and now occupies a group of buildings which are filled with goods of every description but all of the highest quality, a fact which accounts for the remarkable and widespread reputation which the store has always enjoyed. Its goods are purchased in large quantities at the principal wholesale centers of the country which enables the company to successfully meet the prices of its competitors.

The main store building is 70 by 110 feet in dimensions and is conveniently arranged for displaying the many lines of goods which it offers to its customers. A department devoted to ladies’ skirts and suits is located on the second floor occupying an area nearly equal to that of the main floor. There is also a warehouse 40 by 70 feet for the storage of general merchandise and other warehouses for hay, feed and coal in each of which lines the company has an enormous trade.

The business is thoroughly systematized and the arrangements and equipment enable the work to be handled to the best possible advantage. Nine people are regularly employed and the force is considerably increased during busy seasons. Charles H. Dickinson, manager of the Itasca Mercantile Company, has been identified with the enterprise since 1895 and has filled his present position since 1901.

The company was incorporated in 1901 and at once set about the improvement of the magnificent water power of the Mississippi River at this point, where incalculable energy had been going to waste for ages. Dams were constructed which provide an 18-foot fall of water, which is utilized for the operation of several sets of turbine wheels, 3,500 horsepower being available in time of high water, while at the lowest stages of water, only 1,200 horsepower can be utilized. Owing to the spasmodic manipulation of the government dams on the upper Mississippi, less power is available at this point than would be the case if the natural flow of the river was uninterrupted.

The plant of the company comprises a number of buildings of solid brick construction. Much of the pulp consumed is manufactured here, from 8,000 to 9,000 cords of pulp wood being consumed annually, but in times of low water, the pulp mill is closed and the pulp used has to be shipped in from other places. The paper mill has a capacity for turning out 50,000 tons of print paper each 24-hour day and employs an average of 100 people in its day and night shifts. Much of the product is sold direct to newspaper publishers, the balance going to wholesale paper dealers in different parts of the west. The plant began operations in February 1902.

Besides the paper and pulp mills and other minor departments of the establishment, a shingle mill is operated in connection with the plant which turns out 15,000,000 shingles per annum. The waste from the shingle bolts is utilized as fuel for heating boilers by which steam power is made to supplement the water power when needed. An additional 500 horse power is secured in this way.

The Itasca Paper Company has a paid in capital of $200,000. Its plant and equipment are thoroughly modern and the best paper making machinery is used, while the most enlightened methods prevail in the management of all departments. A reputation has been established for its products which is scrupulously maintained at the highest standard and causes a constant demand in excess of the supply. The phenominal [sic.] success which the undertaking has enjoyed from the start is a source of special pride to all the people of Grand Rapids, and its benefits are shared by the entire population.

A. C. Bossard, treasurer and manager of the Itasca Paper Company, has been a resident of this city since 1900. He superintended the construction of the plant and has always managed the enterprise. He spent a number of years in connection with paper mills in the famous Fox River Valley of Wisconsin, becoming familiar with the industry for which that region has long been famous.

Mr. Bossard is one of the substantial and influential citizens of the town. He is one of the chief stockholders and president of the First State Bank of Grand Rapids and also helped to organize the First State Bank of Bovey, of which he was the first president. His numerous business cares do not prevent his manifesting a wholesome interest in the general progress and prosperity of the town. He is now serving as president of the village and his administration has been distinguished by a series of public improvements which are adding much to the stable and artistic appearance of the place.

Source (text and images): Iron Ranges of Minnesota, an illustrated supplement to the Virginia Enterprise published in 1909, provided by the Virginia Area Historical Society.

Iron Ranges of Minnesota, 1909A priceless historical repositoryWeddings of yesteryear