Hoops at the Hipp 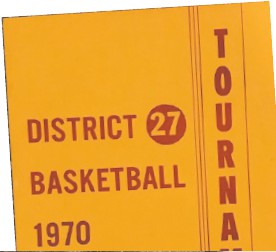 EVELETH — The Eveleth Hippodrome (Hipp) is justifiably famous for hosting some of the best hockey players and teams in America since 1922. It also hosted the District 27 high school basketball tournament for many years.

District 27 was one of 32 districts statewide. Those 32 districts represented almost 500 teams in the late 1960s. The last tournament at the Hipp was held February 23 through March 3, 1970. The Eveleth Golden Bears won the championship that year and in 1969.

Winning a district title in those days was a very big deal. It meant you were one of only 32 teams that still had a shot at making the eight-team State Tournament in Williams Arena on the University of Minnesota campus. I played in the 1969 and 1970 district tournaments as a member of the Golden Bears. In the 1970 tourney, 14 schools played 13 games over six days.

The Hipp was the center of the basketball world for a week as fans flocked there night after night, often filling it to capacity. The sounds of the high school bands, the team colors, the mix of different letter jackets, the cheerleaders, the smell of popcorn, the rivalries, the banners and signs the fans brought to the games, and the cigarette smoke drifting in from the lobby combined to make playing in the Hipp a very memorable experience. 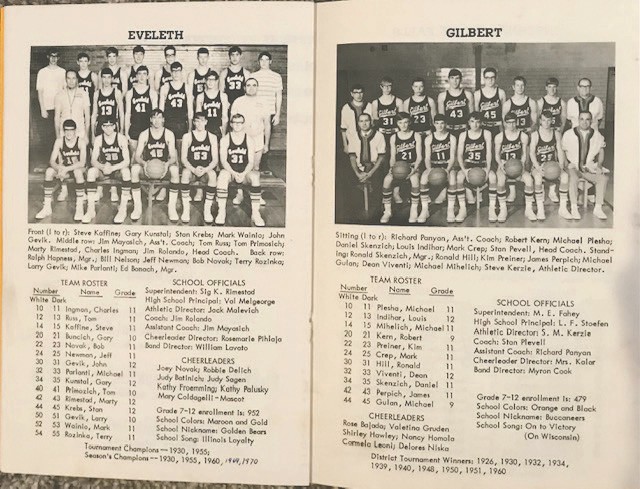 Beyond the very strong hockey atmosphere, the Hipp could be a little bit funky place to play basketball. The portable court looked much better from the stands than it did to the players themselves. The individual floor sections were square and when assembled, some of the edges didn’t match exactly along the joints. Those joints and a couple of dead spots, where the ball didn’t bounce back up all the way to your dribbling hand, could be a problem if you didn’t know where they were. The floor sat about eight inches above the surrounding surface.

When you came running out from the locker room, you had to be careful not to trip as you stepped up onto the court. Falling on your face in front of a full Hipp was a legitimate concern.

Hipp, whose baskets seemed to be hanging in a vast space. All of us were accustomed to having nearby walls or a lower ceiling as points of reference while shooting. It took a little shooting practice to get used to the baskets.

Despite the eccentricities of the

Hipp for basketball, the games themselves were often intense and the crowd noise could be deafening as it rolled over the court.

When I was a sophomore in 1969, we played the Virginia Blue Devils in a semi-final game. They had beaten us by 21 points earlier in the season in their gym. The Hipp was standing room only with a very pumped-up crowd.

At the jump circle to start the game, adrenaline ran sky high. It was never difficult to get fired up when we played Virginia in any sport at any time. We upended Virginia 80-67 that night, behind 31 points by junior Stan Krebs and 20 by senior Frank Kunstal to advance to the finals versus the International Falls Broncos.

We beat the Broncos 60-48 the next night despite being down by four at halftime. Stan and Frank once again led us with 26 and 13 points respectively. After the game, we walked through six inches of snow (it always seemed to snow during the tourney) from the Hipp to Al’s Pizza downtown to celebrate.

Al’s was packed wall-to-wall with Eveleth students and fans. It was a great and loud place to celebrate a championship. The following week, we lost to Duluth Central in the regional semifinals in Duluth. Central went on to be the runner-up in the State Tourney.

The next year, there were higher expectations for our team. Our coach, Jim Rolando, a demanding taskmaster, conducted three-hour practices almost every day. Adult players from town and Jim (Demo) Mayasich, assistant coach, scrimmaged against us after our team practice. Those long hours in the gym would pay off for us.

Our team ranked in the top 20 statewide during the 1969-70 season. We had one of the best (if not the best) players in the state in Stan Krebs, who averaged 30 points once again. Overall, we were a talented veteran team that could stop teams defensively.

Stan was 6 feet, 7 inches tall and one heck of an athlete who excelled at many sports, much like his fellow Class of 1970 hockey-playing friend, Doug Palazzari. Following graduation, Stan accepted a full scholarship to play for the University of Minnesota Gophers.

We played the Orr Braves in the quarterfinals of the district tourney. We beat them earlier in the season in front of a standing-room-only crowd in Eveleth for their only loss of the year. The Braves had their own 6-foot-7-inch star, Bob Wiersema, who always played Stan tough. We handed them their second loss of the season that night in the Hipp, but only after coming from behind in the third quarter. All-District 27 junior forward Mark Wainio led us with 22 points. The win came at a price. Stan injured his right foot during the game, which played a role in limiting him to only 12 points.

Next up for us were the Babbitt Knights in the semi-finals. Our game was the second of the night. Gilbert versus Virginia preceded us. Virginia was undefeated in the district and heavily favored. Gilbert was the underdog and a heavy crowd favorite that night. The Buccaneers were a talented team with sharpshooters Kim Preiner and Mike Mihelich.

Our team watched from a distance as Gilbert pulled off the upset of the tourney. It was an incredible scene in the fourth quarter with the crowd just plain going crazy. That game was a tough act to follow!

We advanced to the finals versus Gilbert by holding Babbitt to only 39 points, as Stan poured in 27 points despite his injury. The foot was not getting better and was serious enough that we planned on facing Gilbert without Stan right up to game time. Somehow Stan found a way to play through the pain, netting 29 points, and scoring the 2,000th point of his remarkable career that had begun in eighth grade.

Gilbert may have had a letdown from their upset win the night before, and we beat them handily for our second District 27 championship in a row. As a player, you never get tired of your fans, family, and friends rushing the court at the final buzzer, especially in your hometown.

The Region 7 finals were held in Hibbing. Our team beat Hibbing 60-56 in overtime in the semi-finals and Duluth East 68-63 in the finals, despite being down 18-5 in the first quarter, to advance to State. Still playing on the injured foot that prevented him from practicing, Stan scored 21 points versus Hibbing and 38 versus East in truly legendary fashion. By the time we traveled down to the State Tourney, Stan’s foot was severely hobbling him. Without him at full speed, we lost to Robbinsdale in the first round.

In 1971, the district tourney moved from the Hipp to the Miners Memorial Building in Virginia. Gilbert avenged their loss in the 1970 finals by beating us in the quarterfinals on a last second 25- foot shot by Jim Perpich. Nowadays, Jim never misses a chance to remind me of that shot. (By now, the shot has since grown to at least 35 feet!)

District Tournament basketball in the Hipp was special. It was fitting that Eveleth won the last championship held in the Hipp. Changes were coming. Embarrass closed their high school in the spring of 1970. One-class basketball became two-class in 1971, with Virginia and International Falls moving to Class 2A. We didn’t know it at the time, but in many ways, an era had ended. I am very glad and proud to have been a part of that era.