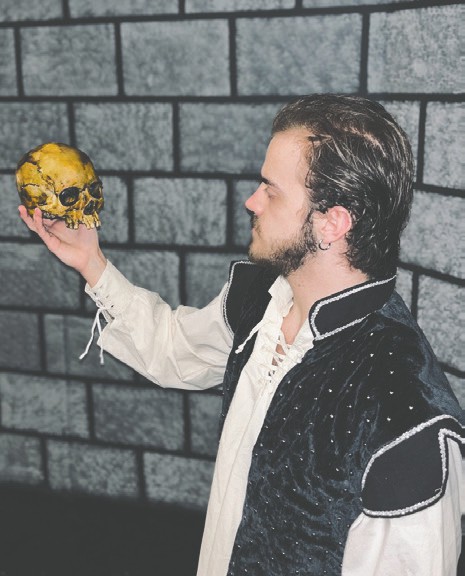 GRAND RAPIDS — “To be…or not to be. That is the question.” Probably the most recognizable line from the works of William Shakespeare’s Hamlet, a tragedy written in 1600. It was his longest play and is considered among the most powerful and influential works of world literature. Three different versions were written, between 1603 and 1623, each one crafted with lines and entire scenes missing from the others. Three different versions toured the land, with a story capable of endless retelling and adaptation by others.

Fast forward to 2020 where we meet Grand Rapids Players playwrights Jake Anderson and Joshua Cagle, who recognized a challenge and added a fourth version to Shakespeare’s most popular work. Well…mostly.

True to Shakespeare’s original story, Anderson and Cagle’s version does include the ghost of the King of Denmark who tells his son Hamlet to avenge his murder by killing the new king, Hamlet’s uncle. Hamlet feigns madness, contemplates life and death, and seeks revenge. His uncle, fearing for his life, also devises plots to kill Hamlet. The play ends with a duel, during which the King, Queen, Hamlet’s opponent, and Hamlet himself are all killed.

But what if? What if a misdirected community theatre troupe were to get a hold of the script and try to bumble their way through? Can you picture it? It could still be Hamlet. Right? Well…mostly. And thus, the title evolved: “Hamlet…Mostly.”

“Hamlet…Mostly,” Director Anderson explains, “Is peppered throughout the show with mishaps unfolding that include, wardrobe malfunctions, broken props, forgotten lines, set failures, spotlight miscues, cast injuries, over-zealous actors, over-heated microphones, and performers gone AWOL! Framed by a less-than-perfect set design, this tragedy turned-comedy promises to be the funniest rendition of Shakespeare ever to grace the stage of the Ives Theatre.”

Writer/Director Cagle comments on writing the script, “I have been wanting, for a long time, to get into writing. The quarantine gave me a chance to finally do it. And, to make it even better, I got to write with my best friend, Jake!”

Writer/Director Anderson added, “While in the brainstorming process, we looked at our strengths to help us write something that folks would enjoy. What we agreed on was that Josh knows ‘funny’ and I, as an English major, know Shakespeare. And then we both agreed, ‘Let’s take Hamlet and make it funny!'”

As co-writers/co-directors, they are both confident that “folks in our area are really going to enjoy what we’ve created. Shakespeare has never been seen like this before!”

Grand Rapids Players President John Schroeder celebrated the production. “As we affirmed at our 2018 visioning retreat, while we are dedicated to showcasing longtime classics, we also eagerly explore original works to present. As an original adaptation of a longtime classic, Hamlet…Mostly beautifully balances the breadth of our creative pursuits.”

Performances of this Grand Rapids Players’ farcical comedy are scheduled for January 14, 15, 21, 22 at 7 p.m. and January 16 and 23 at 2 p.m. at the Ives Theatre in Grand Rapids. For reserve ticket information, visit www.grplayers.com.

Hamlet…Mostly is made possible, in part, by of a generous gift from the Blandin Foundation.