Former Blue Devil and Bulldog Niskanen retires from the NHL 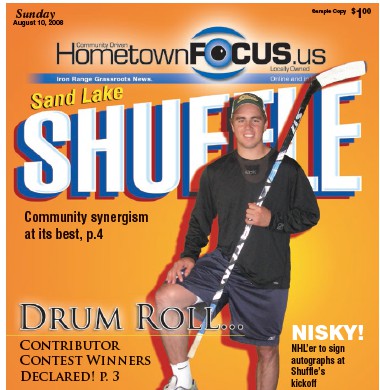 Mountain Iron native and NHL defenseman Matt Niskanen
appeared on this cover of Hometown Focus on August 10,
2008. Niskanen played for the Virginia/Mountain Iron-Buhl
Blue Devils and the University of Minnesota Duluth Bulldogs
before being drafted by the Dallas Stars in 2005.

Matt Niskanen announced his retirement from the NHL on October 5.

The 33-year-old defenseman played this season for the Philadelphia Flyers after they acquired him in a trade from the Washington Capitals on June 14, 2019. He had one season remaining on a seven-year, $40.25 million contract ($5.75 million average annual value) he signed with Washington on July 1, 2014.

“Thank you to the Flyers organization for the opportunity to play in [Philadelphia] last season,” Niskanen said. “I’d also like to thank the fans for their support and lastly, I wish my teammates the best of luck.”

Niskanen was second among Flyers defensemen with 33 points (eight goals, 25 assists) in 68 games, playing most of the season on the top defense pair with Ivan Provorov. Niskanen averaged 23:04 of ice time and had one goal and one assist in 15 postseason games for Philadelphia, which lost in six games to the New York Islanders in the Eastern Conference second round.

“I want to thank Matt Niskanen for his contributions to the team this season,” Flyers general manager Chuck Fletcher said. “He’s the consummate professional and teammate. Besides his on-ice contribution, he contributed so much to our group from the way he prepared, from the way he practiced, he did everything the right way in drills, which was a great lesson for a young defenseman to watch day in and day out.