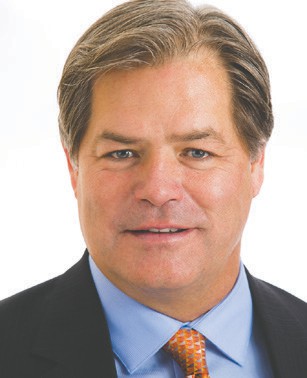 “Jim has always had the courage and dedication to the client to do the right thing, even if it’s the hard thing,” said Harry Sieben, retired president of SiebenCarey. “He weighs the risks and decisions from the perspective of what’s right for the client. He’s applied this same approach to his service to hundreds of thousands of constituents as a threeterm Park Commissioner in Hennepin County.”

Carey grew up in Biwabik. Today, he and his wife, Molly, reside in Edina. This year, the couple will celebrate their 40th wedding anniversary. They have three children and four grandchildren.

“I’m truly honored to receive the Alumni Achievement Award,” Carey said. “My education at St. John’s University played an instrumental role in developing me as a human being and teaching me to respect others. When we sit at the table with our peers and choose to value their experiences as much as our own, we lift each other up—nothing is more important, especially following a tragic accident or life-changing event. I’ve tried to live each day with this in mind as I practice law and help others.”

“I’m a fellow alumnus of St. John’s University and have been close friends with Jim since grade school,” said Mike Larson, one of eight SJU classmates who nominated Carey for the award. “One thing that’s remained a constant throughout every stage of Jim’s life is his impeccable character. He’s a talented and charismatic lawyer with an incredible work ethic. He’s also a loving father, devoted husband and grandfather, a highly regarded mentor, and a loyal friend.”

After graduating from St. John’s in 1982, Carey began his legal career as a law clerk and researcher at SiebenCarey. Upon receiving his J.D. from the William Mitchell College of Law in 1987, Carey joined the firm as an attorney and became managing partner in 2008. Carey helped build SiebenCarey into one of Minnesota’s largest personal injury law firms, which has served more than 65,000 clients in Minnesota and Wisconsin during its 70-year history.