Bears and other animals hibernate. Why can’t I? 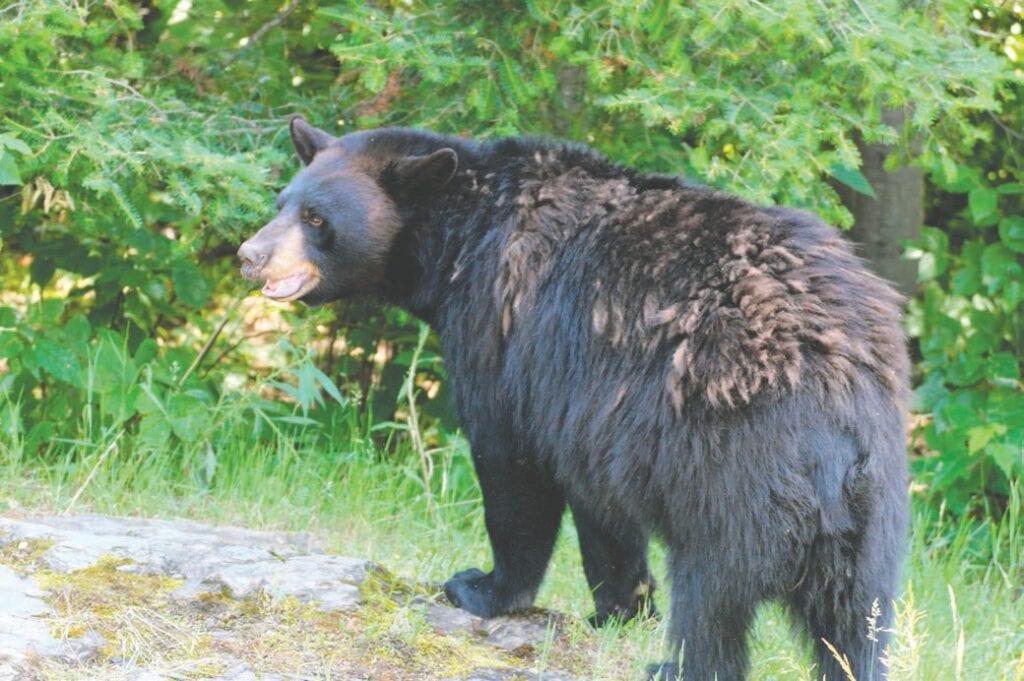 After hibernation, it takes a while for bears to lose their winter coats. Even though this picture was taken last summer, it shows the brownish-colored fur of Holly’s winter coat. Once the hair dies, it lingers on the bear’s body and gets bleached by the sun, turning it that brown color. Photos by Jill Pepelnjak.

ELY — For this article I headed to the North American Bear Center in Ely to see the black bears there and to learn more about hibernation, a process that both amazes and puzzles me.

During my drive to Ely last week, I found myself thinking about hibernation and how nice it would be, in the midst of all this chaos, to curl up and sleep through the winter. I know humans can’t hibernate, but the thought created some interesting scenarios in my mind.

I arrived at the Bear Center on a beautiful fall day. Each time I’m there for a visit, I discover a treasure-trove of information. It takes more than one visit to see and learn everything that the center has to offer. However, this visit was special— the bears there would soon be entering hibernation. Holly, one of the bears, was already in hibernation when I arrived.

According to its website, the Bear Center is the only black bear and wildlife educational facility of its kind. Dedicated to replacing old myths with facts, the center allows people to learn from the bears themselves about bear behavior, ecology, and their relations with humans. The bears can be viewed from the inside viewing windows or the outdoor viewing balcony, both offer a view of the pond and waterfall area that the bears frequent. 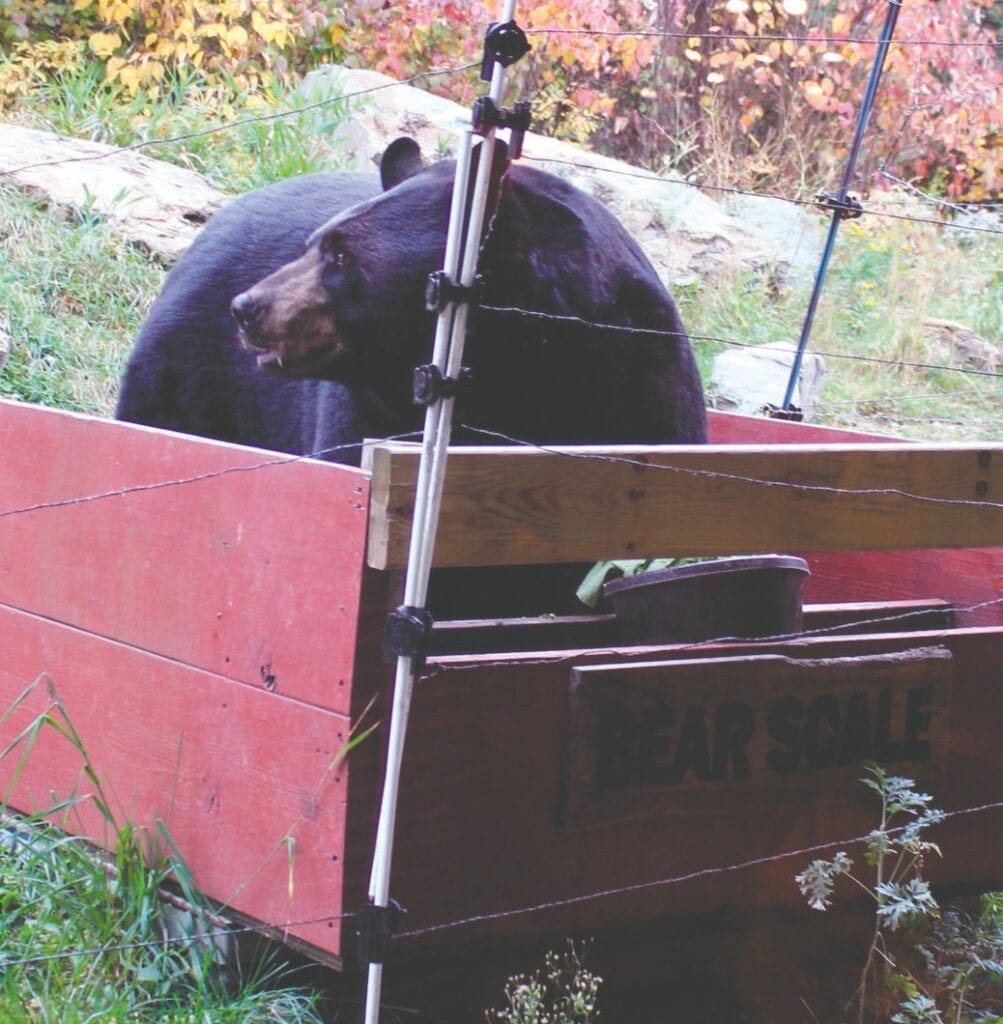 Lured into the weighing box with a big bowl of vegetables, Lucky looks around at his surroundings while he is being weighed. He weighed in at 500 pounds.

The Bear Center is home to four ambassador black bears—Ted, Lucky, Holly and Tasha—living in a 2.5 acre naturally forested enclosure with a pond and waterfalls. The bears forage on a variety of wild foods in the enclosure. The bear enclosure is a model for how captive bears live as natural a life as possible. The staff and bear educators care for and work with the bears in many ways to enrich their lives.

On a behind-the-scenes tour I learned the heartfelt stories of how these bears came to the North American Bear Center. I also learned a little about their personalities.

Born in 1997 and raised for 10 years in captivity in Wisconsin, Ted is the oldest male black bear at the center. He arrived at the center on April 28, 2007, just prior to its opening in May 2007. Ted, who is now in retirement, is described as gentle and trusting. For Ted, retirement means rest, less public appearances, and more rest.

Born in 2007 in the wild of Wisconsin, Lucky is said to be quite a comedian and often demonstrates his playfulness for visitors. He arrived at the center on July 6, 2007.

Born in 2013 in the wild of Arkansas, Holly is the oldest female black bear at the center. Holly is gifted with a delightful personality. She came to the center on Dec. 27, 2013.

I also questioned Sharon Herrell, the senior bear keeper at the North American Bear Center, and Spencer Peter, biologist and program director at the center, about hibernation. You will find Sharon’s answers below, followed by Spencer’s answers. (You’ll find my personal comments in parenthesis as I continue to unrealistically entertain thoughts about hibernation as a way to escape the chaos in the world today.)

Q: Why do bears hibernate?

Sharon: The lack of food causes bears to go into a hibernation or torpor. Female bears with first year cubs tend to den later as to let the cubs get as big as possible before denning. All bears are usually in their dens by November 1.” (That date works for me.)

Q: How do bears prepare for hibernation?

Sharon: First, bears go through a process called hyperphagia, a period of excessive eating and drinking, to put on weight to prepare for winter and hibernation. (No more dieting!) After hyperphagia, bears prepare for hibernation by purging their bodies, drinking more water and eating less foods.

Q: How do bears determine that it is time for hibernation?

Sharon: Their body genetics, daylight hours, lack of foods…everything is a bellshaped curve.

Q: Do bears build their own dens?

Sharon: Yes, bears make their own dens. It may be a rock den or a downed tree where they dig into the root system, allowing snow to pile near the den entrance, but not in the den. Bears also create dens by digging into the hillside or mound. In creating dens, bears include ground clutter, such as chewed sticks, cedar, leaves and weeds, as their denning material.

Bears in hibernation can also sleep near the base of a tree with no apparent den. There was one instance noted that a bear denned in an old eagle nest. (These types of dens don’t really appeal to me. I would have to have a custom-built den with heat, plumbing and electricity. And, in case I might get hungry, I would need my cellphone to call for food delivery.)

Q: I understand that Lucky and Holly have denned together in the past. And when Lucky was young, he hibernated with Ted. Isn’t it uncommon for bears to hibernate together?

Sharon: As we know today, bears don’t hibernate together, but more research needs to be done to rule this out. For instance, it is possible that related yearlings (young bears) den together. Also, first year cubs’ den with their mother. (It would be nice to have company.)

Q: As they get ready to enter hibernation, what do the bears weigh now at the center?

Q: How much weight will the bears lose during hibernation?

Spencer: On average bears will lose 18 to 22 percent of their total body weight. (I could stand to lose more than a few pounds.) However, larger specimens and lactating females can lose up to 30 to 40 percent. (Way to go, bears!)

Q: What keeps the bears warm during hibernation?

Spencer: Two layers of fur, as well as the metabolic properties inside their body, help keep the bears warm. (I would have to buy lots of long underwear to keep warm in hibernation. And I would also need to bring my Sherpa blanket.)

Q: What happens to bears’ bodies during hibernation to keep them alive?

Spencer: Their metabolic process changes quite a bit during their hibernation.

Their heart rate, breathing and other bodily functions slow way down. These bodily functions are working at their slowest rates, yet they still allow the bear’s body to function properly without wasting energy. (I don’t have the same magical metabolism that bears have in hibernation. I guess I won’t be hibernating anytime soon.)

Q: Do the bears wake up at any time during hibernation?

Spencer: The bears don’t “sleep” all winter long. They are awake for a lot of the winter. Females give birth in the winter den. That happens during the month of January in the Ely area. (It’s okay if I’m awake during the winter…just so I have lots of books to read.)

Q: How long do bears hibernate?

Spencer: It varies, depending on the geographical location of the bear to which you are referring. Here in Ely they will typically go into hibernation mid-September to October. They will come out of hibernation in late April to early spring in the Ely area, bear hibernation about seven months. (That’s enough time for me to destress.)

Q: In the spring, do the bears awaken quickly or does it take them some time to get going?

Spencer: It takes the bears some time and lots of stretching to get moving. Directly after emerging from the den, there is about a two-week period called walking hibernation when the bears are pretty lethargic for the first little while they are awake. (Oh, my aching joints!)

Q: Do you have some fun facts about bears?

Spencer: Technically, bears are not considered true hibernators anymore. Their winter dormancy is called torpor. About 90 percent of a black bear’s diet is vegetation or comes directly from vegetation. (Vegetation. Who knew?)

The fastest black bears can run up to 35 miles per hour. (I went online to determine how fast a human can run. According to the New York Times online, the fastest anyone has run is about 27 1/2 mph, a speed reached by sprinter Usain Bolt just after the midpoint of his world-record 100-meter dash in 2009. I am out of this competition.)

Okay, I realize hibernation isn’t for me. I’m not adequately equipped to hibernate. And I do have lots to do during this time…counting my blessings, praying for those less fortunate than myself, celebrating the holidays, paying my bills, talking to my friends and relatives…

In addition, my three-year-old greatniece Emmi needs to finish teaching me how to “Shake My Sillies Out.” At our last session, I could tell from her expressions that my moves to the song needed some work, especially when I was trying to wiggle my waggles away.

I think it’s time for my nap…all this talk of hibernation has made me sleepy. While I’m napping, you’ll want to visit www.bear.org for more information about the North American Bear Center.

The North American Bear Center in Ely will tentatively close after Tuesday, October 25, 2020. It will open the second or third weekend in April. Check the center’s website at www.bear.org for updates.

Do you want to build a snowman?Patti Wallert: candidate for Biwabik City CouncilJulie Buria: Minnesota House of Representatives District 6B candidate

2 responses to “Bears and other animals hibernate. Why can’t I?”