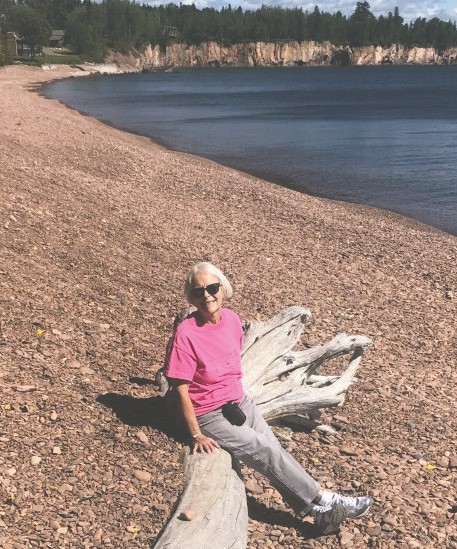 Betty Pond sits on a wood log and poses for a picture while exploring Iona’s Beach. Submitted photos.

My husband Randy had read an article in The Reader that described Iona’s Beach on the North Shore of Lake Superior. It sounded like a good place to visit during this pandemic when we are staying away from crowds. We called our grandson Ethan (who is still willing to go places with his fuddy-duddy grandparents) and arranged a day and time for him to come along with us on a day trip.

I searched the Internet to find information about the beach and the story behind it. For hundreds of years, the waters of Lake Superior have been pounding a nearby rhyolite cliff, causing chunks to fall into the water. The constant waves have broken the chunks into small rocks and thrown them onto the shore. 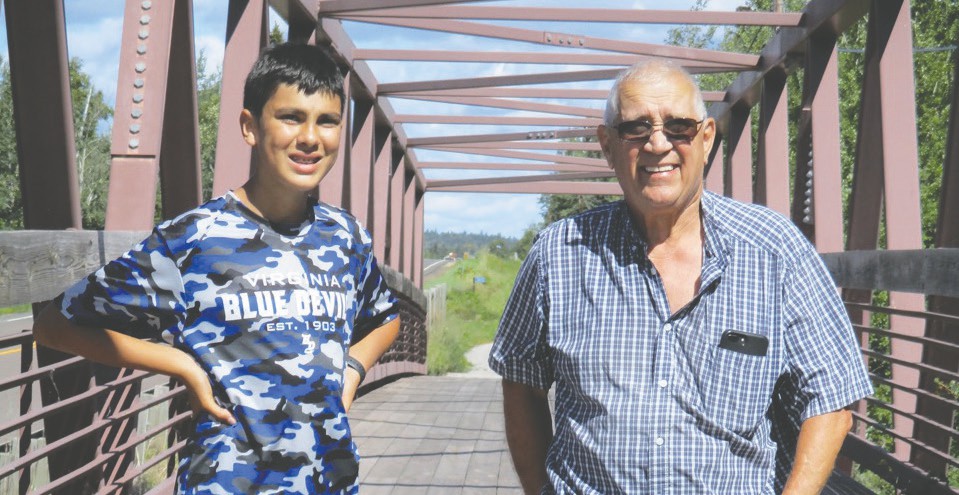 Ethan Pond and his grandfather Randy Pond pause for a photo while on a hike on Gitchi Gami State Bike Trail.

With plans to build a resort, Iona and John Lind bought property near Lake Superior in 1938. In the beginning, they owned 15 acres and six cabins they called Dear Trail Lodge. Later, they expanded to 56 acres, including 3,300 feet of shoreline covered with pink rocks. At some point, the name was changed to Twin Points Lodge. From what I read and from postcards online, I learned that the Linds not only owned the charming little cabins but a café, a general store and gas pumps.

John and Iona’s son Alden said in article in the September 6, 1998, issue of the Star Tribune: “John Lind may have built the resort, but Iona gave it a heart.” Iona thrived on the business and her guests. She greeted them with a smile and a bouquet of wildflowers. She became a friend and confidante to her guests, especially those who visited yearly.

In the article, Alden explained that John built a couple of the cabins from “lumber, windows, and shingles scavenged from an old CCC Camp at Gooseberry Falls.” The restaurant closed in 1976 when John died. Iona kept the lodge and store going until 1994 at which time some of the cabins still rented for $25 a night. 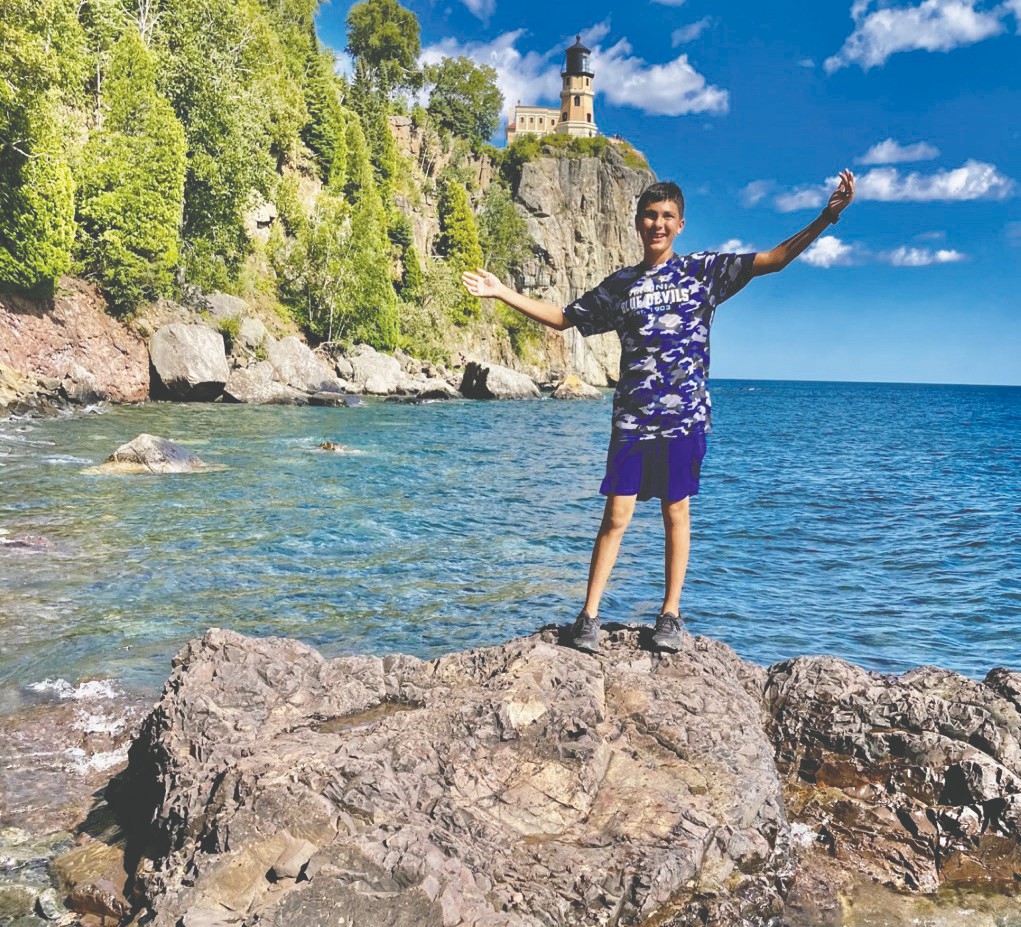 Ethan Pond and his grandfather Randy Pond pause for a photo while on a hike on Gitchi Gami State Bike Trail.

From an article by Steve Pihlaja in the Fall 1996 Sugarloaf Interpreter, I learned that Iona was instrumental in forming the Save the Lake Superior Association, which led the fight to stop the dumping of taconite tailings into Lake Superior. At one point, Phillipe Cousteau (son to Jacques Cousteau) and the crew of the Calypso visited the North Shore to support the effort to save the lake from pollution. They stayed at Twin Points Lodge and became lifelong friends to the Lind family.

In 1995, ownership of the property was transferred to the State of Minnesota. Since Iona had a great love for the lake and spent a portion of each day on the pink beach for more than 50 years, the beach was named Iona’s Beach. The Minnesota Department of Natural Resources has made the beach an official scientific and nature area.

Back to our excursion. We found the beach easily. If you are driving north on Hwy. 61, continue about three miles past Gooseberry Falls. Watch for a “Twin Points” sign near mile marker 42, turn in and park to the left. The parking lot is where the resort was located. The path to the beach is short but beautiful with majestic tall pines and birch trees all along it. The rocks are not as pink as we expected, more pinkish-brown, but the vast number of them is astounding.

Many of the rocks are about the size of a bar of soap. They are flat and have been worn smooth by the water and hold the wonderful warmth of the sun. Holding a warm smooth rock in my hand was somehow very comforting. I noticed many of the rocks had shiny specks and I since have learned that when the lava cools quickly, it traps gases that form cavities called vugs. Fine crystals can be deposited in the vugs, causing the shiny specks.

We spent some time walking on the beach gathering rocks that we thought were special. Ethan had a good time throwing rocks and making them skip over the water. We had read that the waves lift and drop the rocks, causing them to fall against each other, making a chiming or tinkling sound. People are fascinated by the singing rocks. We were at the beach on a beautiful day full of sun. Unfortunately, it was calm and there weren’t any waves. I hope to return sometime to hear the music.

As we were leaving the beach with a small bucket of pink rocks, a woman informed us that taking rocks from the beach is not allowed. She pointed out a sign with such information, so we reluctantly dumped out our rocks.

Adjacent to the beach is the Twin Points Protected Access for Boats that has been in use since 2002. Between the beach and the boat access is an area of shoreline where enormous rocks have been thrown ashore. We sat on the rocks and enjoyed our picnic while admiring the greatest of the Great Lakes. After lunch, we hiked along the beautiful Gitchi Gami State Bike Trail.

We drove a few miles to the Split Rock River Wayside on Hwy. 61 and walked through the underpass to the shore where we gathered a few rocks that were not protected by law. Some of them were pink in that area, also.

Our next stop was at Split Rock Lighthouse State Park. We were being conscious of social distancing so we didn’t go into the store or museum (the lighthouse and homes are closed to the public at this time,) but we walked down to the shore to get a good view of the historic lighthouse.

After a stop for ice cream, Ethan was pleased to see Rocky Taconite in Silver Bay. Rocky was the subject of a report for school that Ethan had written a few years ago, but he had never seen the statue in person. This Silver Bay landmark has been welcoming visitors to the city for nearly 60 years. It was another great photo opportunity.

We arrived home exhausted but thrilled to have enjoyed so many of God’s great creations in our wonderful Northland.

Betty Pond lives in Mountain Iron. She is a frequent contributor to Hometown Focus.

Tiny, sweet, and delicate (part three)Left to our own devicesNew opportunities for youth Lyric Center offers many creative outlets